When it comes to transforming a back yard, an outdoor fire pit rates high on everyone’s DIY to do list.  When Jacque and I purchased our new home last year, we were moving from a townhouse.  One thing that always bugged me over there was that we were pretty restricted about doing anything outside the house, as the yard itself was considered common property.  So when we made the decision to move, one of the first things I thought of was how awesome it was going to be to decide for ourselves what we wanted to do in our new backyard.  The number one thing on my list was an outdoor fire pit.

We’re lucky to have an incredibly talented friend, Jesse Hoffman, who is a professional landscape designer.  Good Ol’ Jesse was kind enough to come by the house, listen to our ideas, add his input, and put the pencil to the paper!  I had envisioned a stacked stone circular fire pit, but Jesse introduced another idea that involved a more oblong shaped fire pit and landscaping around it.  I think Jacque saw an opportunity to coach him into adding the landscaping as part of the project just to add more to the “Never Ending Honey-Do-List” (Of course she’d never admit to that). Jesse’s idea was to build the fire pit in the shape of an eye, have an area for seating in front of it and a mounded landscape bed surrounding the backside.  Who am I to argue?  He’s the expert, so we went with his idea!

Here’s what we started off with…Just a blank canvas! 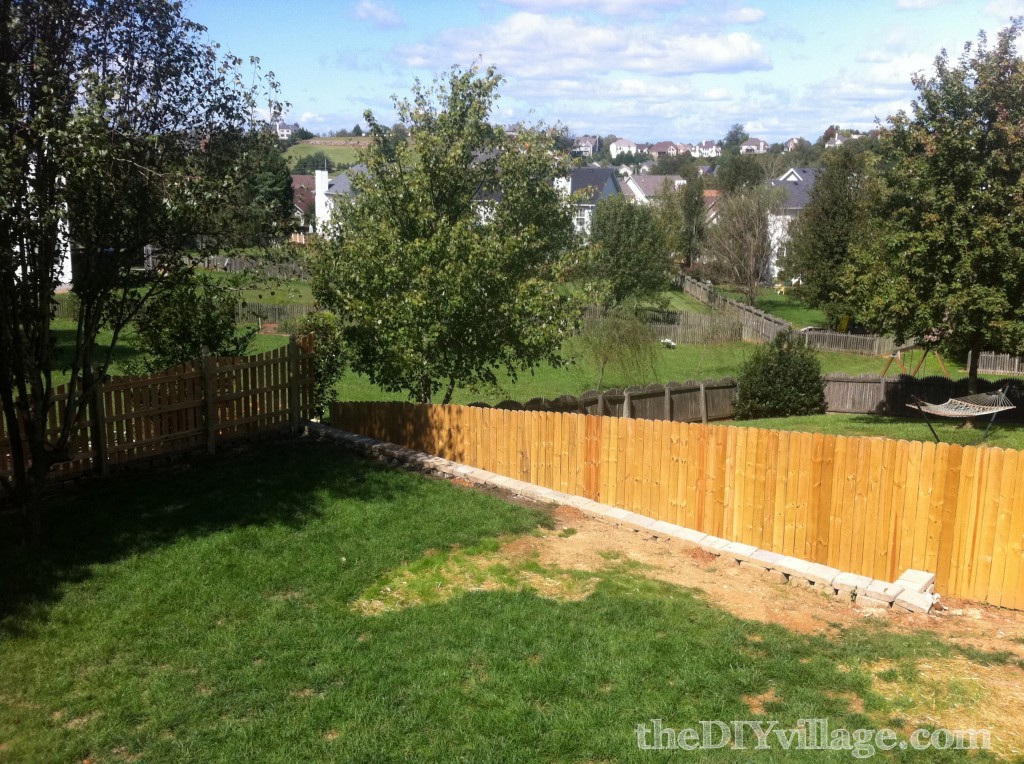 We had to bring in more fill dirt to level out the areas next to the retaining wall. 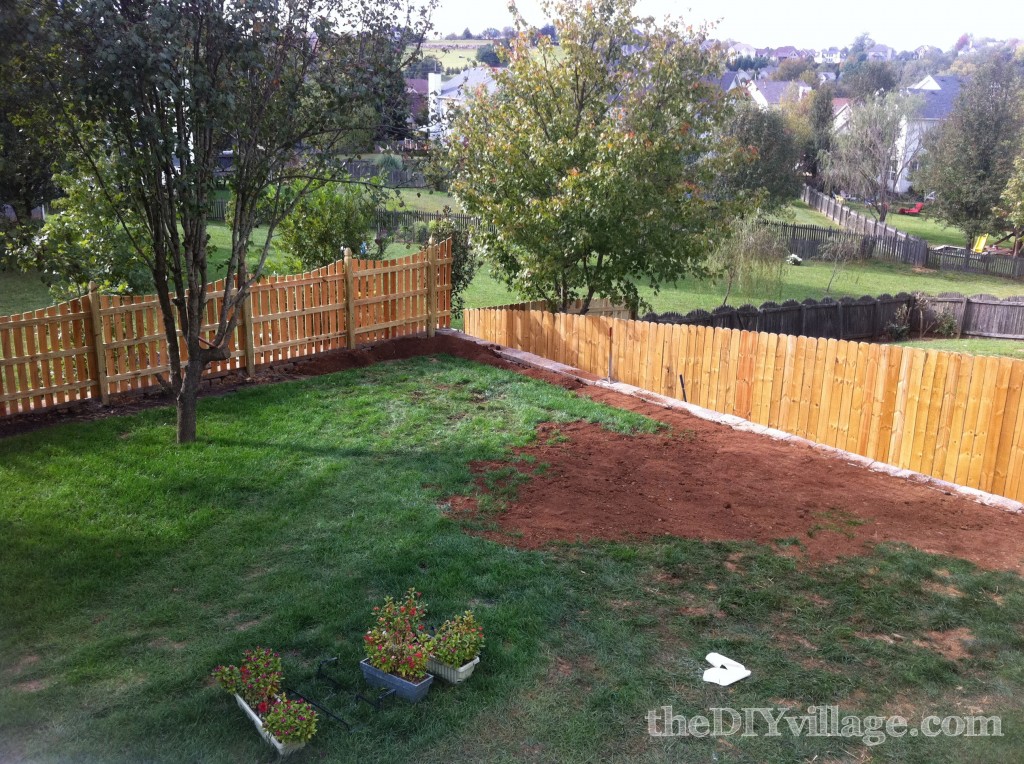 Next we laid out the design onto the ground with spray paint to give us a feel for where everything would be, plus it made it easier to know where and what to dig! 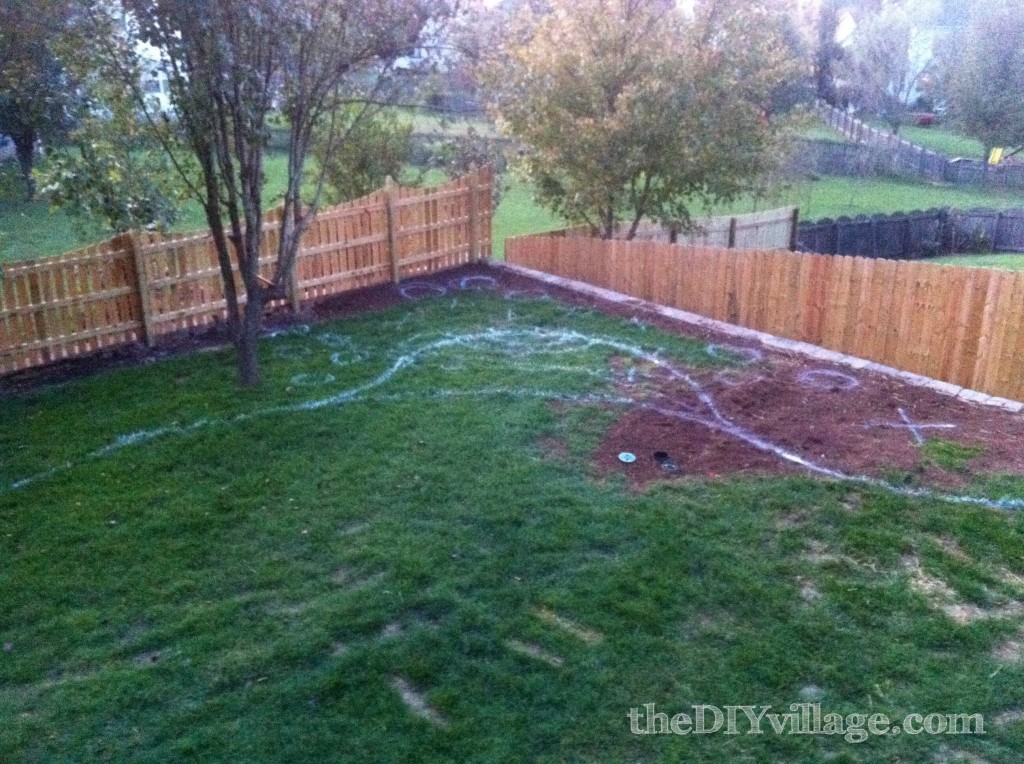 Then we brought more dirt in to build up the landscape beds.  Altogether we hauled in an additional twelve cubic yards of fill dirt. 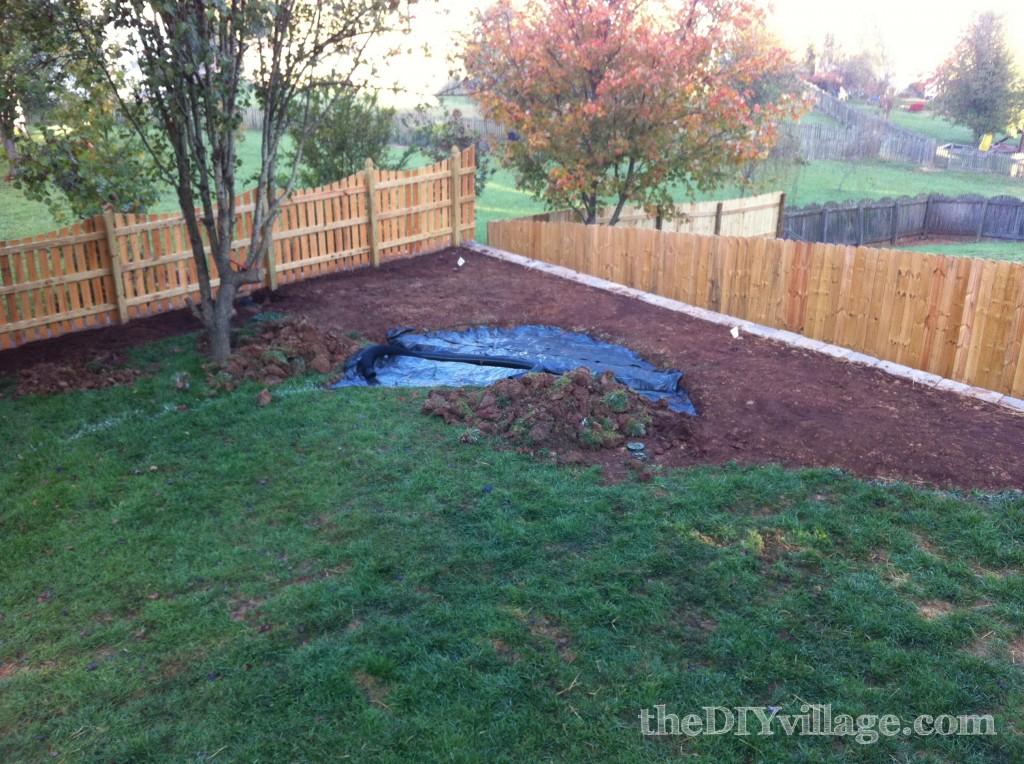 The next step in the installation process was to dig out the actual shape of the fire pit.  I chose to dig down about eight inches so that we could lay a base layer of gravel to allow any water to drain below the surface of the fire pit. 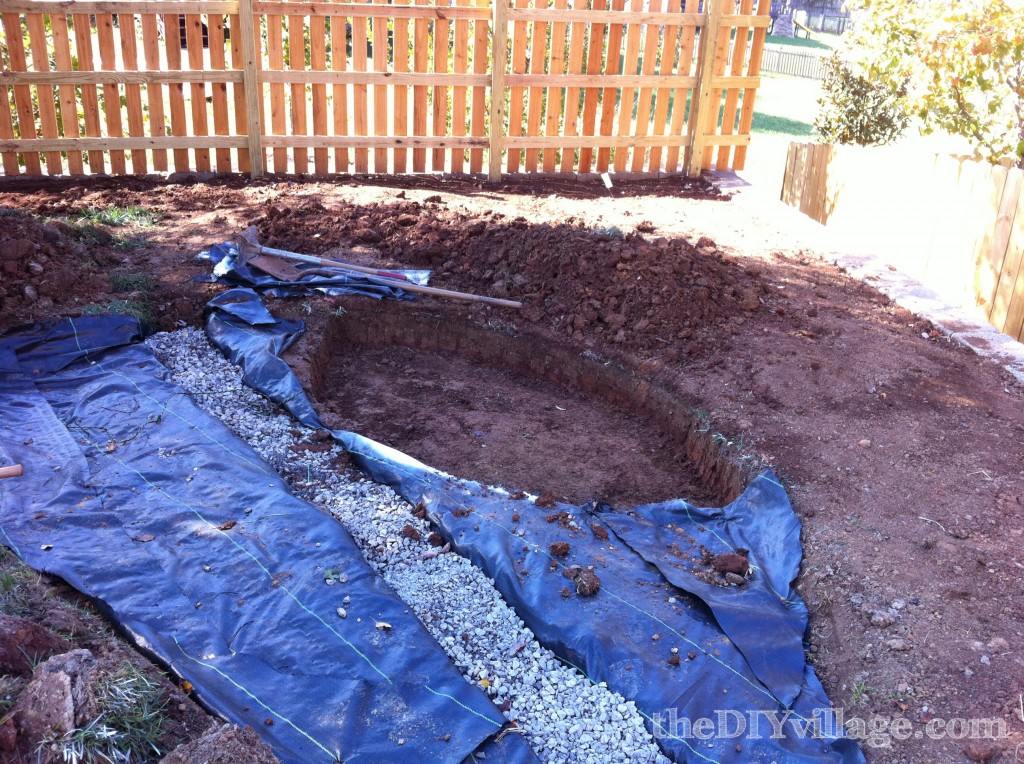 With the gravel in place we then began to stack the stones to create the outline of the fire pit. There wasn’t a lot of skill involved in stacking process.  I tried to use stones that stacked nicely side by side and on top of each other. I could have used mortar to secure the stones in place, but with the height being so minimal and the higher stacked backside being built up against a mounded landscape bed, I felt that there was already plenty of stability. 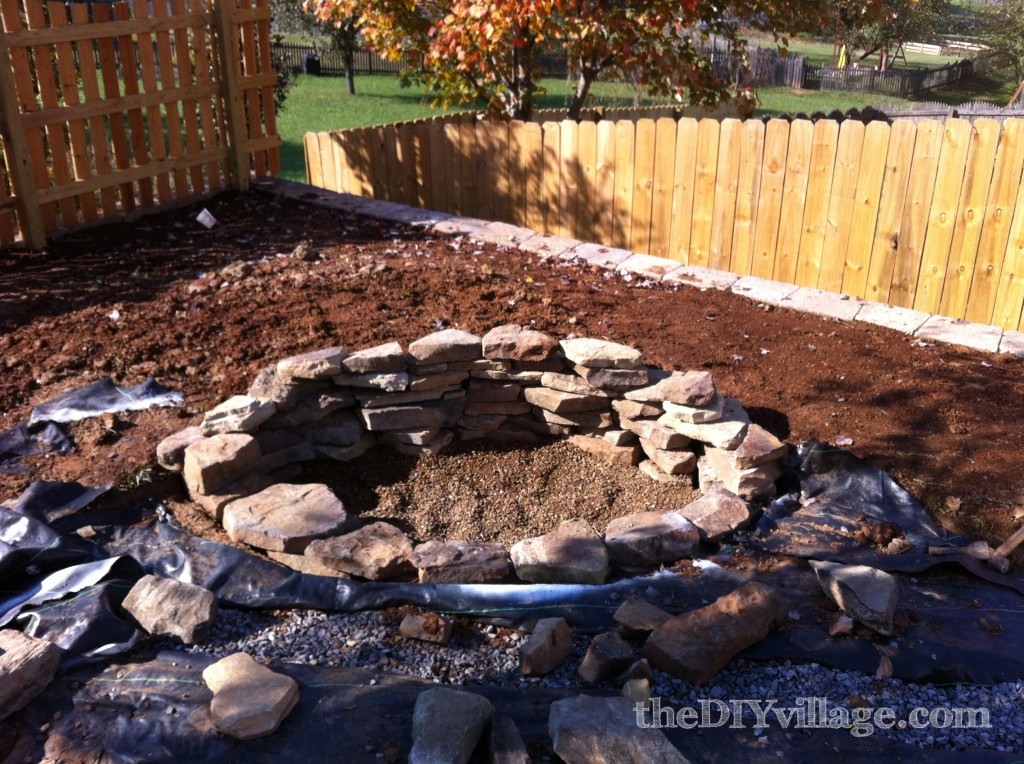 Now that the fire pit was practically complete, we brought in the plants to finish off Jesse’s design.  We were careful to choose a variety of plants that wouldn’t leave the yard feeling bare in the fall and winter. 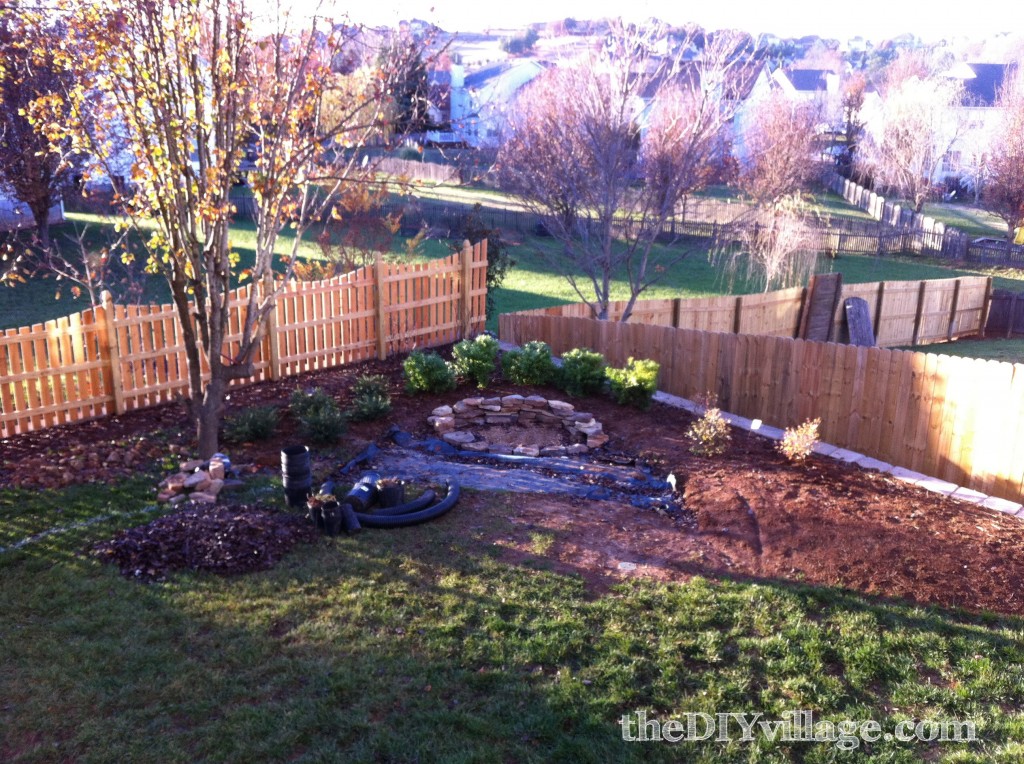 We placed flagstone pavers to make up the area where we plan to having seating and we placed metal bed edging to help border and define that space. 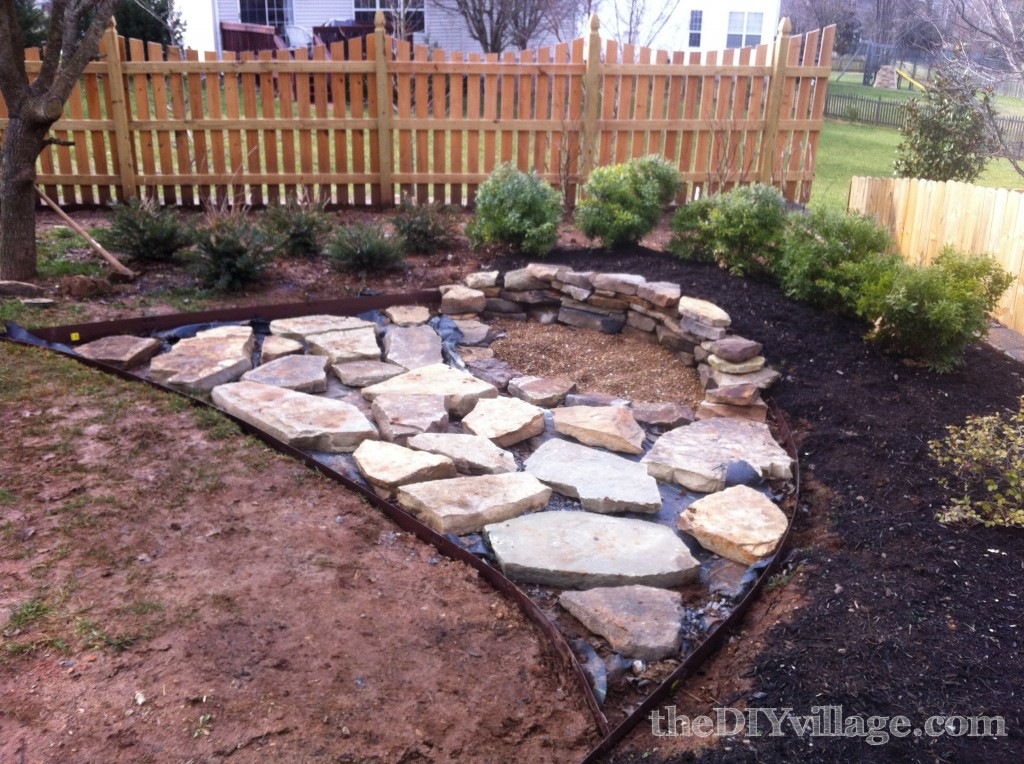 Lastly we added pea gravel as filler in between the flagstone and we installed some low voltage landscape lighting to accent the area at night.

And here it is from a distance. 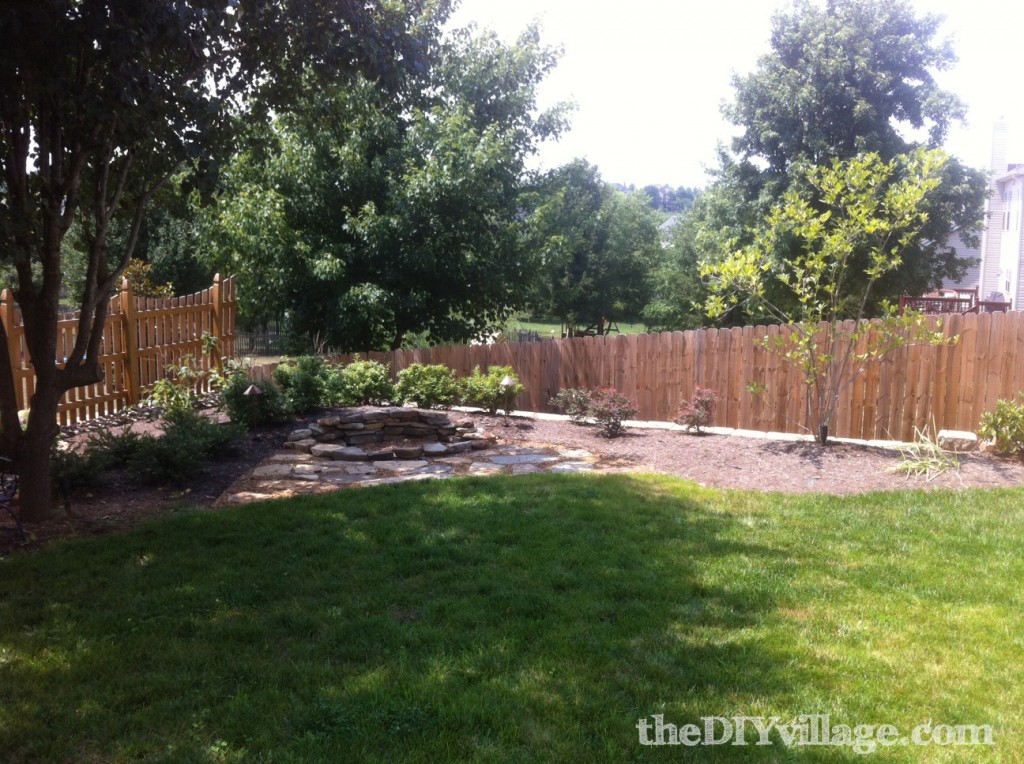 And from a different perspective! 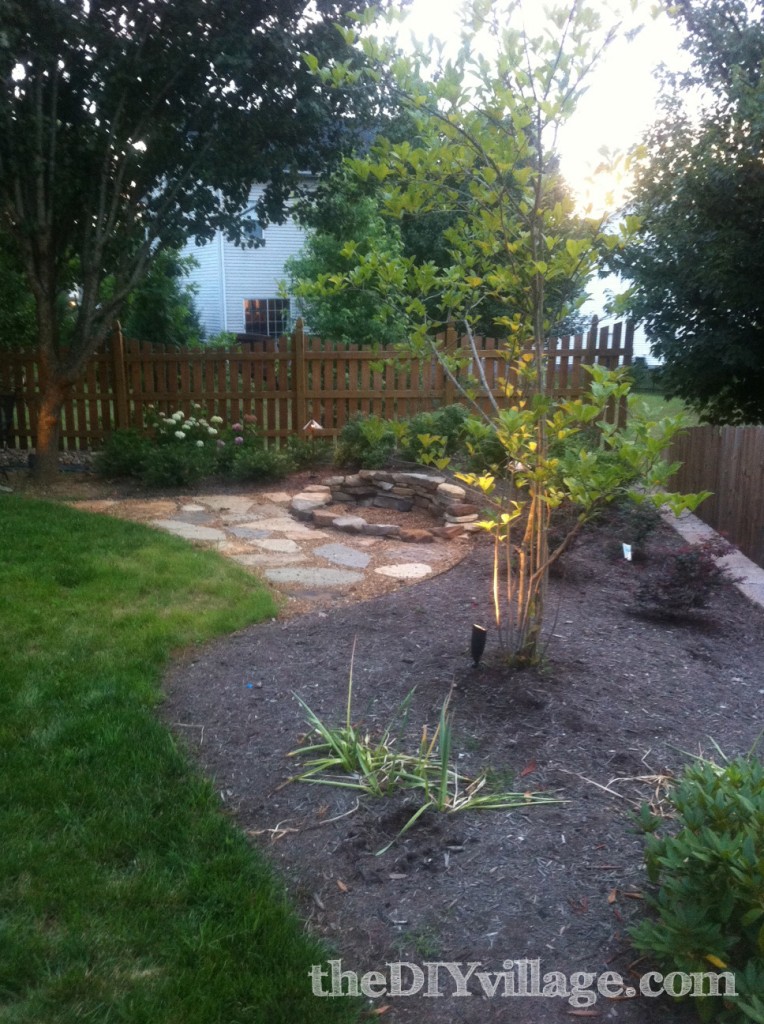 I can’t tell you how excited I was to finish this project!  We’ve still got a lot of projects planned for the yard, but I am looking forward to some late night lounging out at the fire pit!

Now we just need to decide what to do for seating…We’re looking for ideas so feel free to leave us your suggestion!