I’ve discovered that I have developed a love for lanterns.  It could be their rustic nature…Or it could be that anytime I see one, I’m reminded of the first time Jacque and I ever went camping together (Insert pause for sentimental reader reaction…Ahhh)…Well, whatever it is, I’m drawn to them.
And as a firefighter, of course, I have a love for LED lights!  (Generally, the brighter, the better!) But I found that most of the LED lanterns that I came across were missing character…But thanks to an amazing post that Jacque shared with me written by Kelly from View Along the Way, I found everything I needed to make my own LED Lantern! 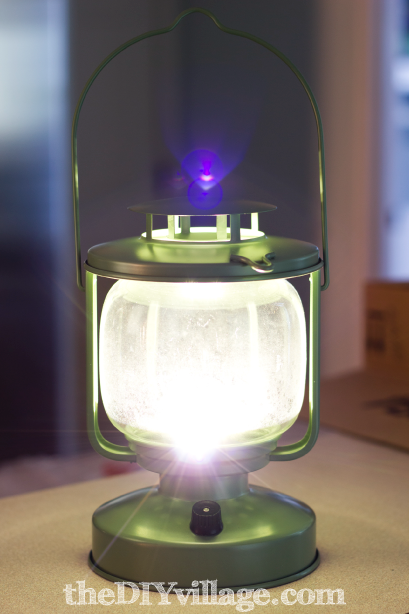 Kelly had written a post on How to Make Any Lamp Cordless.  As soon as I saw what she had done, I knew I had found a solution that would let me combine my love of lanterns and LED’s without taking away from the character of the lantern! 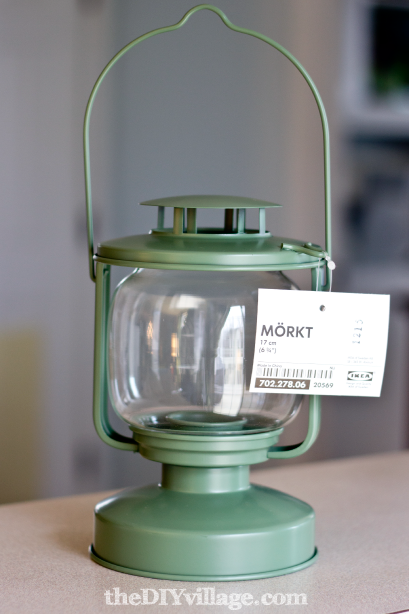 While driving home from Ohio after Christmas in a pretty substantial snow storm, we were faced with a decision…Do we diligently stay our path and make our way home as quickly as possible…or do we throw caution to the wind and risk getting stuck in even worse snow conditions by taking the exit off of the interstate that would lead us to…IKEA!  Of course, we “took shelter” at IKEA.  And I’m glad that we did because while strolling the isles, I happened upon this MÖRKT Tealight Lantern.  It had the look I wanted in a lantern and its design would work nicely for the LED conversion that I had in mind…So $5.99 (plus tax) later, I had the first piece to the puzzle! 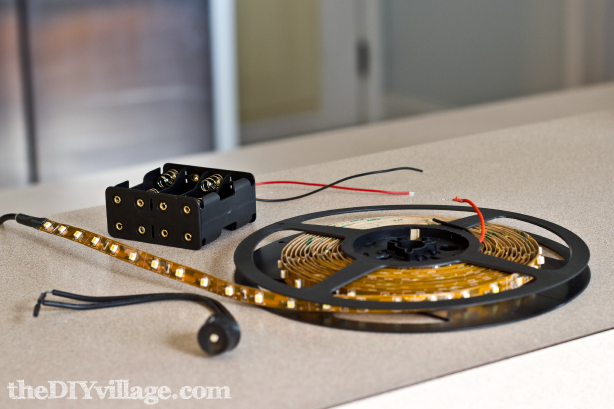 Next, I got onto Amazon and ordered the LED strip

I needed. I wanted to find a switch that looked like a fuel cap that might be found on a kerosene lantern. Luckily Lowes is only about 5 minutes away and I found a rotary switch that would aesthetically work for me. Now it was time to put the pieces of this puzzle together! 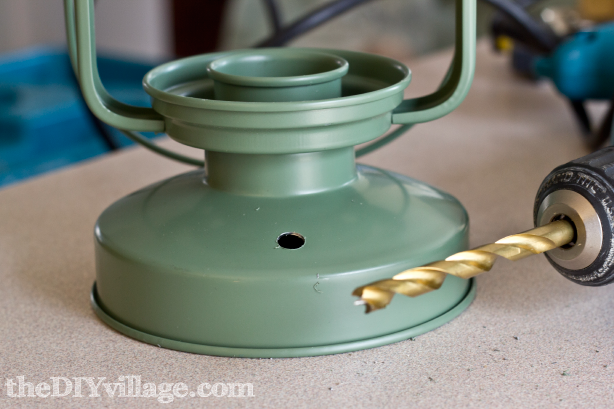 The first thing I had to do was to drill a hole in the base of the lantern, just large enough to fit the threaded end of the rotor switch through. 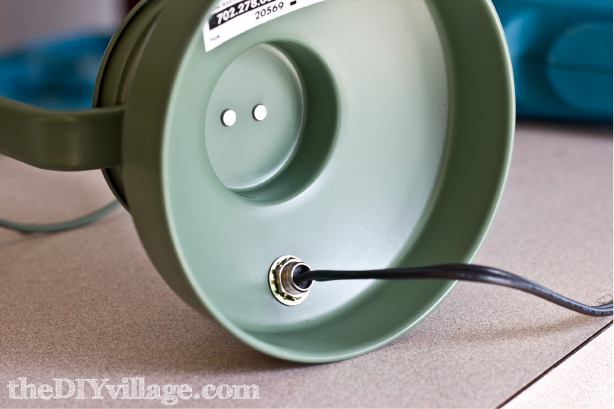 On the under side of the base, I secured the switch in place with a washer and nut. (Both are included with the switch)

Now I was ready to solder the wires onto the LED strip. I followed Kelly”s instructions on wiring up the fixture.  The only difference was that my red and black leads went from the LED strip directly to the battery pack, so I didn’t have existing wiring from the lamp to deal with, and because of that, I also had to install my own switch. More on that in a minute! 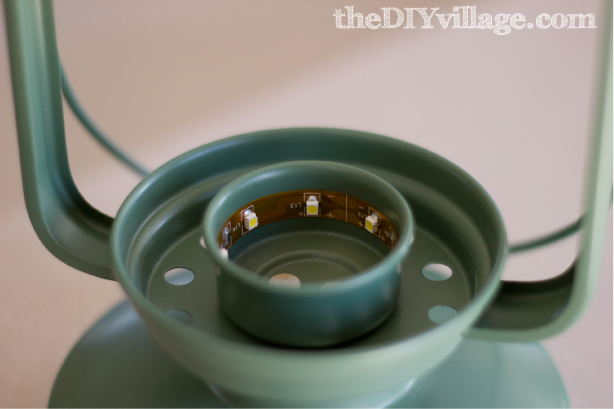 I didn’t want to lose the rustic look of the lantern, so to help hide the wires, I lined the inside of the tealight tray with the LED strip.  (You could always move them to the outside of the tray, or any where else on the lantern, if you want more light).  It’s got an adhesive backing on it, so all I had to do was peel the paper off and adhere it to the surface!  Placing it there also gave me easy access to the hollow base below. 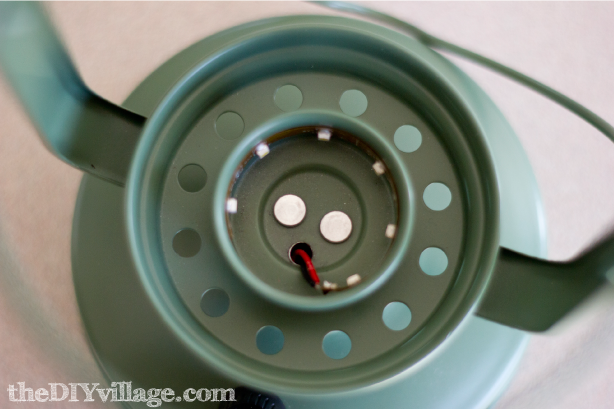 I drilled a small hole in the tea light tray, just large enough to fit the wires through, and just like that, I was ready to wire in the rotary switch and the battery pack!

Adding the switch is really simple…In theory!  The switch is wired in-line on either the hot or the ground wire. (In-line meaning that you choose either the red or black lead, cut it, and then connect the wires from the switch into the lead you just cut)

Now, I have to confess that I wasn’t paying close enough attention to what I was doing when I wired the switch the first time…Yes, I said the first time.  I wired one side of the switch to the hot wire and the other end to the ground…The result…I created a short in the wiring!  Jacque, who was holding the battery pack, very calmly asked me why the batteries were getting so hot…In a few short seconds she looked like she was playing hot potato with the battery pack as she very quickly handed it off to me!  I had enough time to start removing the batteries just as the plastic ends of the battery pack began to melt!  It took a call to my Dad and my Father-In-Law before I even figured out what I had done!   Not my proudest moment!  But I gracefully recovered and corrected the wiring on the back-up battery pack that I had ingeniously purchased! 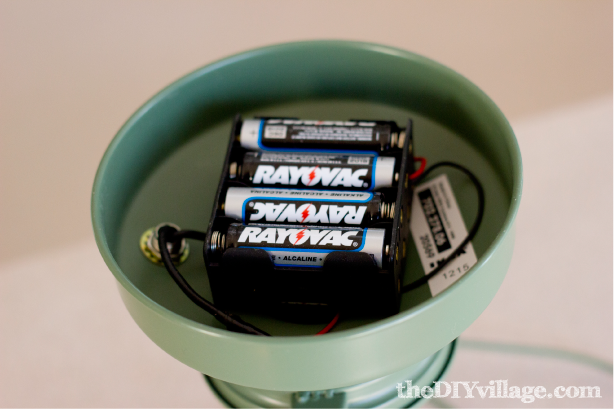 The battery pack fit nicely in the hollow base. 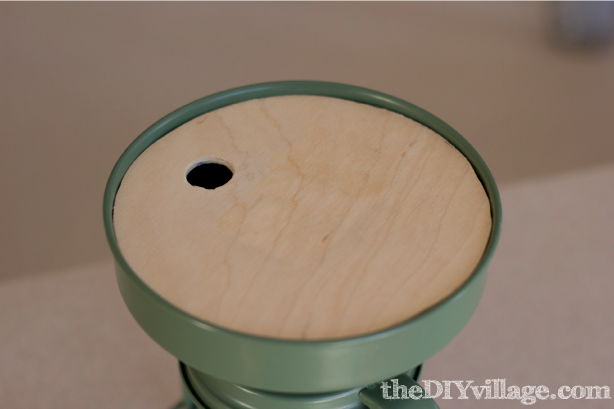 To finish off the lantern, I cut a small piece of luan to snuggly fit in the under side of the base. Then to make it easy to remove, I drilled a hole in the luan to use as a pull. 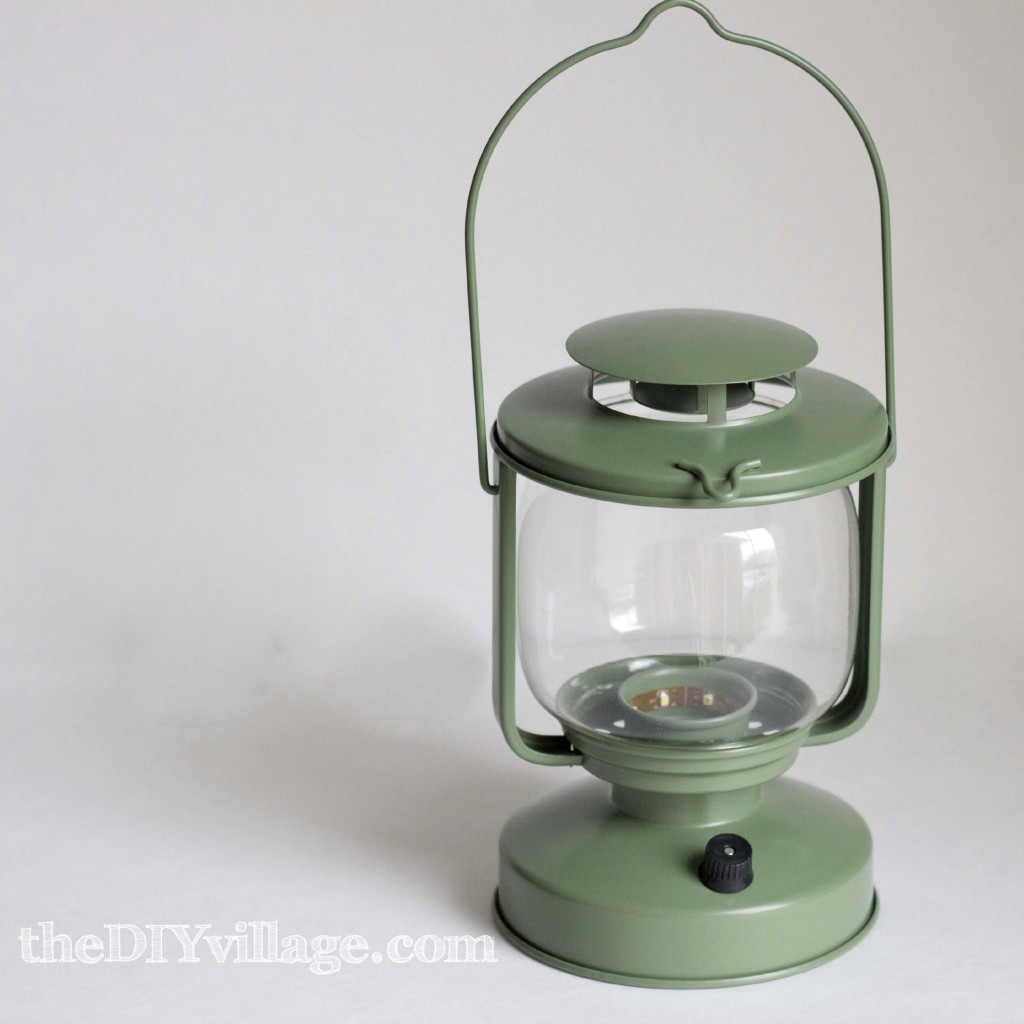 So this is it!  My IKEA MÖRKT Tealight converted into an IKEA MÖRKT LED Lantern!

The coolest thing about this project was getting to use the LED strips.  It’s a pretty versatile product, and very inexpensive when you look at the cost of most LED’s.

What projects can you think of using them for?

(Just as an additional warning, I want to point out that the LED strip is rated for a 12 volt power supply, do not use anything rated higher than that for this product as it could lead to injury.)