I’m not sure what I am more excited about the fact that I get to share this awesome DIY contest with all of you or the fact that we were asked to be part of such an awesome cause!  Not only am I co-hosting this contest with OPC’s The Better Half but I also get to chose this weeks winner!  Talk about pressure! 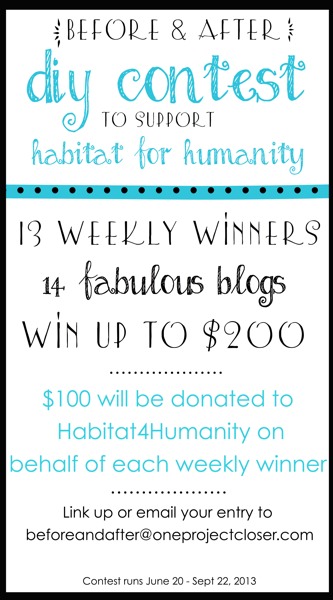 If you have followed Matt and I for any time you know that we LOVE to restore and up-cycle old items.  And one of favorite places to pick up items is at the Habitat for Humanity Restore!  It’s amazing what you can find in there and best part all the proceeds directly to Habitat for Humanity!

Before I babble on much longer lets get to the good stuff!  The contest starts tonight at 10pm and runs through Sunday at Midnight at which time the link party will close and I will get to select a winner … eeeeee!

Before and After for Habitat Contest Overview:

Don’t forget to head over to Pretty Handy Girl on August 29th to enter for another chance to win!