Welcome back everyone!
Yesterday I went over Part 1 of Matt’s Closet Makeover.
If you missed it here is a quick recap.
– Matt needed storage.
– I decided it would be fun to build him cubbies & a hat wall to store his hats.
– I did a drawing.
– The “Top Secret Project” was born!
– My father helped me build the cubbies.
– They got a coat of paint and were waiting for Matt to head off to work
for the installation! 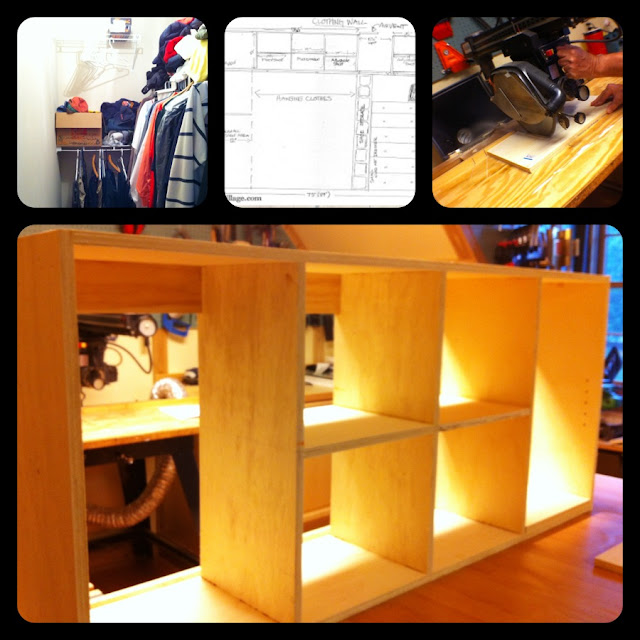 Now that you are caught up let’s get to the good stuff.
I like to refer to install day as my own little personal “D-Day”.
Not nearly as important or even remotely life changing as the real D-day but none the less it was mine.
On Saturday (June 16th) Matt left for work a little before 6 am and I tackled the task of emptying out the contents of his closet.
(A note for our family-Matt does not need any hoodies of any type-he has that covered x20) 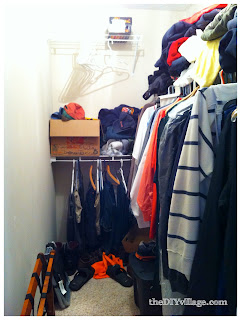 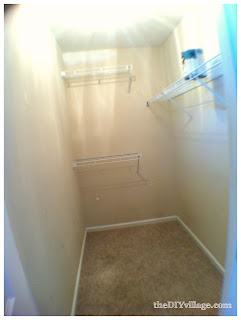 After the pups had been out and fed I got myself a cup of coffee (or two).
Grabbed my paint roller and headed back to the closet! 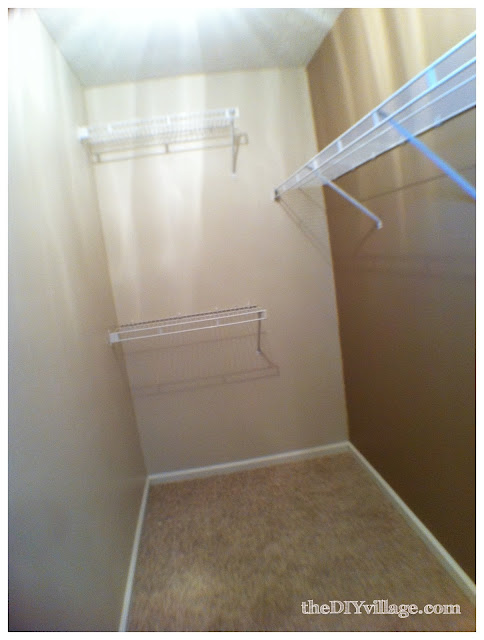 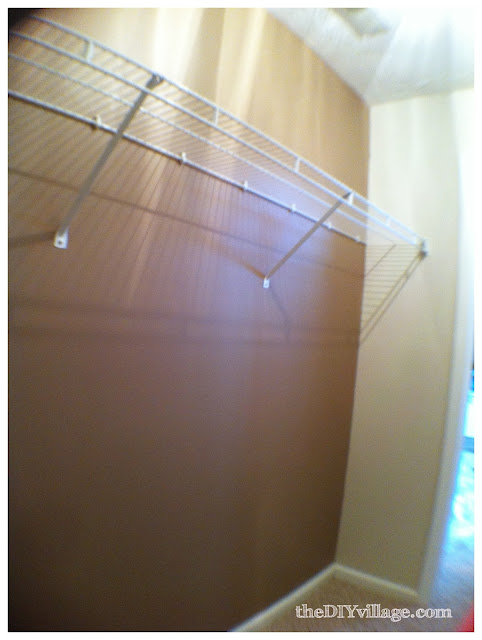 Three of the walls got two coats of ‘Chocolate Froth’ by Behr
We used a brown color we had picked up last fall at the ReStore in Knoxville.
It was the best $ 10 we have ever spent on paint, this the second room I have used this color!
While the paint was drying and I was waiting on my dad to show up
to help me install the cubbies,
I worked on the hat hook knobs … All 32 of them!
They turned out GREAT!!!
Learn how to make the Jute Hat Hooks HERE … 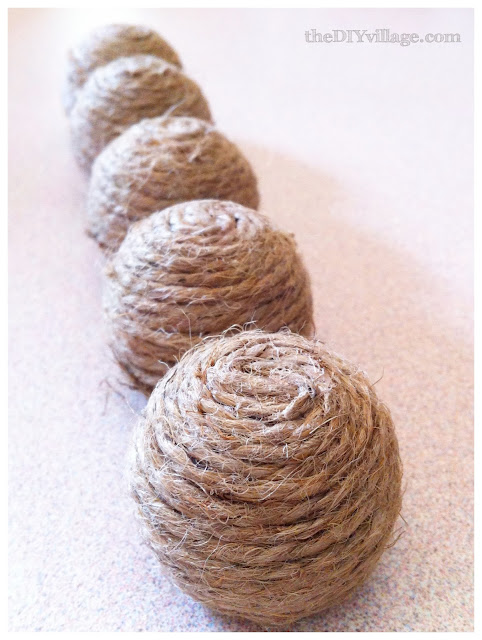 And painted the trim for the cubbies.  Also by Behr in “White Truffle” –
basically an Antique White color. 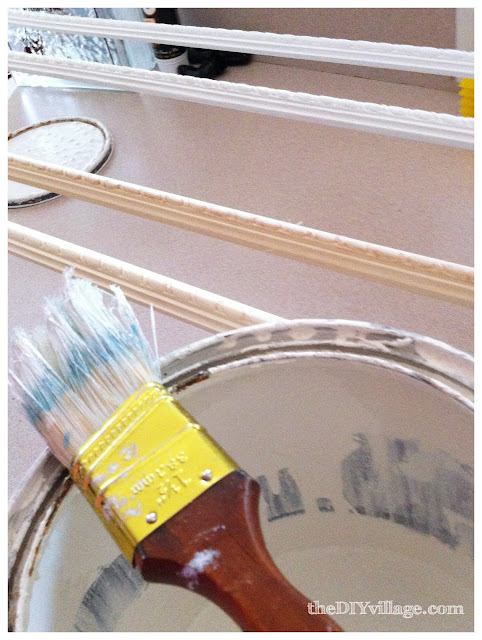 Dad showed up not long after I finished the trim and it was install time …
Well, after we found the studs that is.
Apparently Matt’s closet was an add on by the previous owners.
I always thought it was weird the the master bedroom had 3 large walk-in closets …
mystery solved.
I mean seriously who would complain about that anyway???
We had assumed that the studs would be on 16″ centers … just like the rest of the house.
We were wrong, wayyy wrong and we were blaming our stud finders …
After a few drilled holes it was obvious that the studs were in fact on 24″ centers.
Ahh, of course they were … I wouldn’t expect anything less!
With the studs located we lifted the cubbies into place.
We used a book under each end, checked for level and screwed them to the studs.
These bad boys aren’t going anywhere
(much like the real CUBS, sigh) 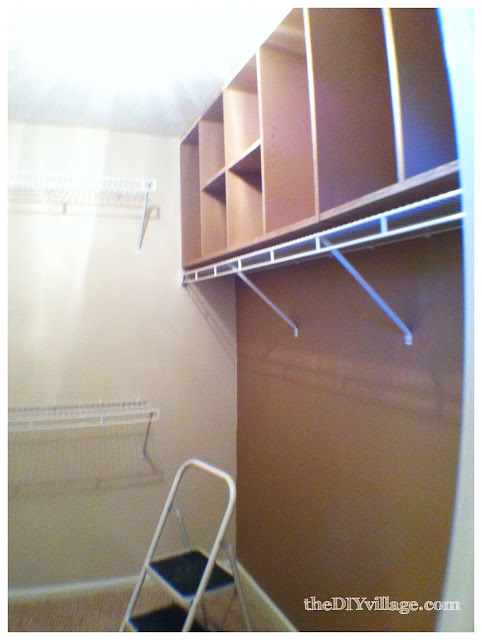 After we installed the cubbies my dad helped me lug the air compressor upstairs,
so I could install the trim.
Confident I could install the trim without the help of my father I sent him on his way to enjoy
what was left of his Saturday night.
Remember that Rule #1 I shared with you yesterday …
“Measure Twice Cut Once”
Yeah well I think I had a brain fart because I forgot this one a few times! 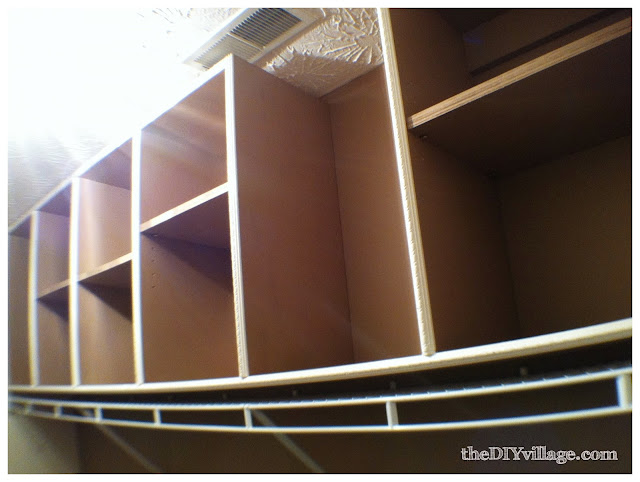 After a few “Extra” cuts the trim was completed.
I won’t lie I did stand back for a few min and bask in the splendor of the cubbies
before I hauled the dresser upstairs, that is.
Remember on my drawing the dresser I had on there? 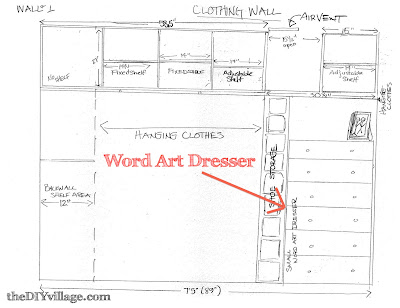 This dresser is the Word Art Dresser Matt completed earlier this year.
I absolutely love how it turned out, only problem was that it was much
smaller than we had anticipated, making it unusable in the space
we had refinished it for.
So our memory lane dresser needed a new home.
Matt’s closet was the perfect place! 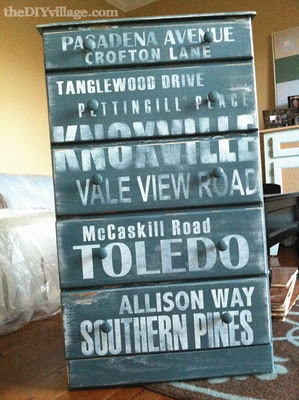 With the dresser in place it was time to LOAD it all back in …
Everything in it’s own little home.
Yard clothes, paint clothes, sweaters, shorts …
All have their own special place! 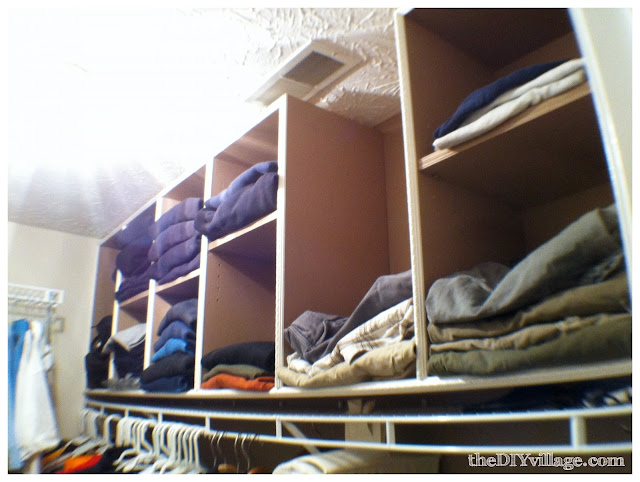 All of his shirts and pants got new felt grippy type hangers.
And his hoodie collection got matching white plastic.
His button downs & polos were coordinated by color
(just like my closet, OCD possibly, pretty to look at OHH yeah!) 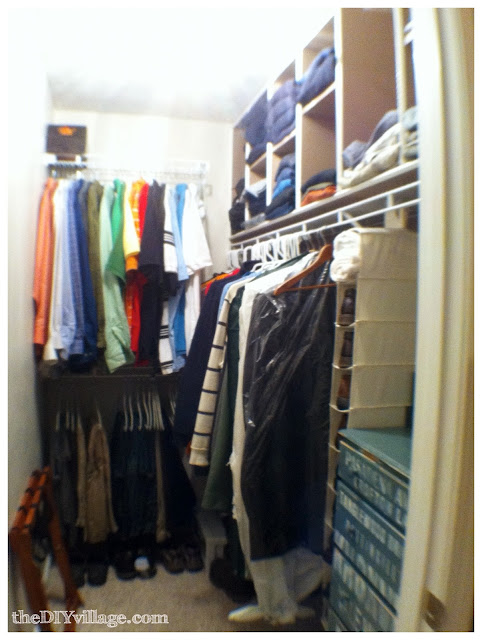 Looking good so far!
At this stage in the project it was about 11:30 pm and I had been working pretty
much non stop for 17 hours.
I was exhausted but so close to the finish I could taste it.
Plus Matt was going to be home in 8 hours and I HAD to finish
what had started all of this to begin with, the hat box! 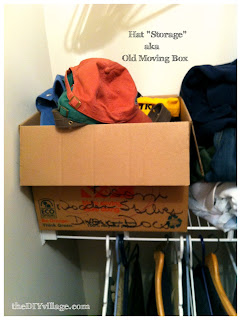 Time for the HAT WALL … as per my drawing 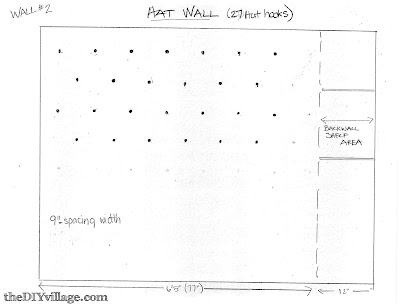 We have 9′ ceilings in our bedroom but Matt is also tall so I measured down 6″ and started my
first row of hat hooks (aka jute knobs).
I marked my first dot with a pencil measured over 9″ and placed another dot.
To make sure they stayed level I placed tape on my level every 9″ so I knew where to mark.
I continued this process until all of my marks were on the wall.
I used 3M Command Picture Hanging Strips (the small ones) on the back of each
knob to hold them to the wall.
Hats have very little weight and I felt this was a much
better alternative to drilling 27 holes in my wall …
No thanks!
With all of the knobs in place it was time to hang his hats! 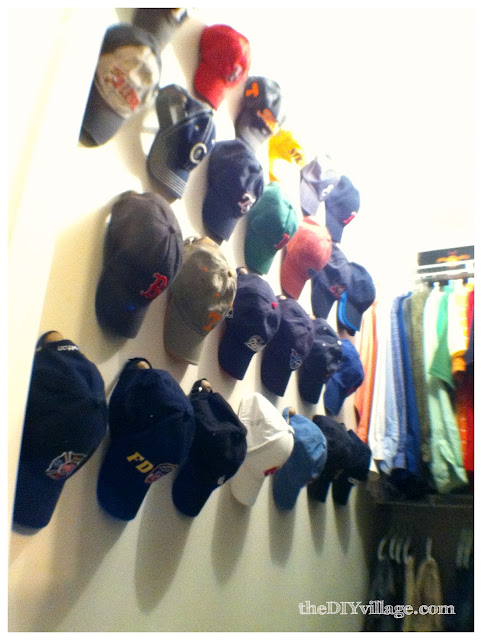 How stinking cool is this??? 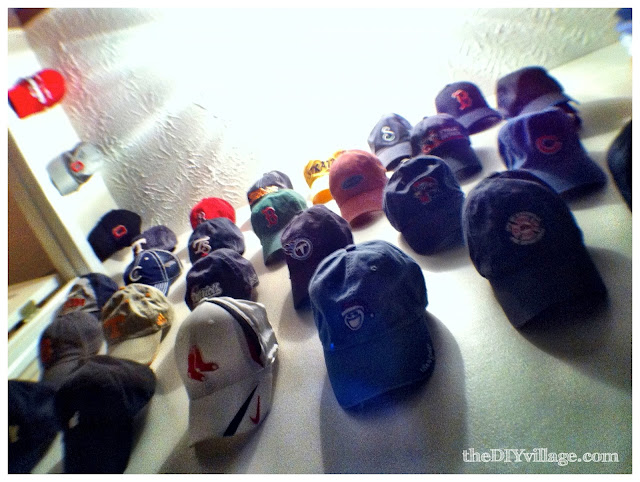 I was even able to hang some over the door way.
When the last hat was hung Matt’s closet makeover was complete!
And at 2:30 am I laid down to try and get some sleep before he arrived home.
I think I may have gotten 4 hours before I woke up.
Once again so excited to show Matt his
Father’s Day Surprise! 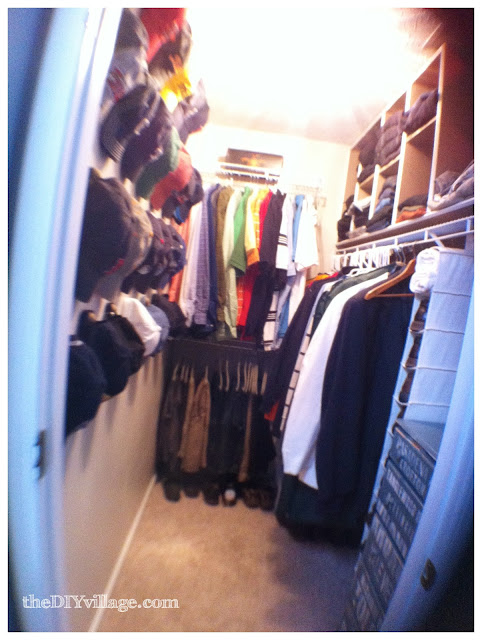 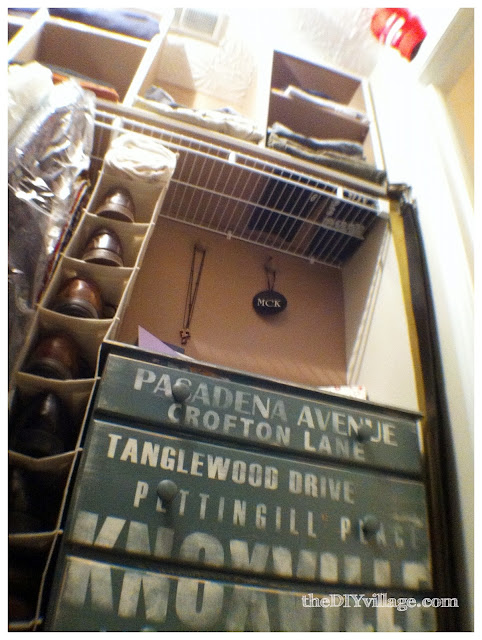 To say Matt was surprised is a gross understatement,
Shocked would be a better description.
He was so excited he immediately took the closet door off of its hinges
and started taking pictures!
I even got a thumbs-up!
Squeee!!! 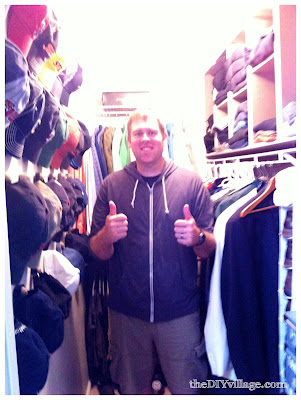 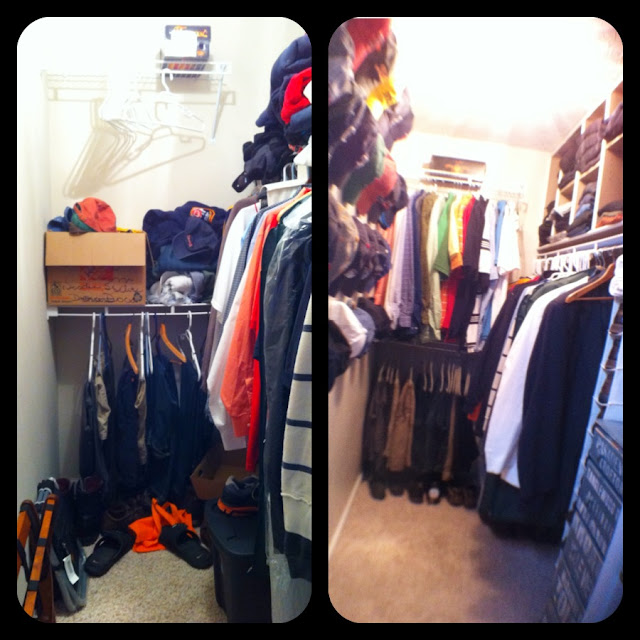 Thanks for stopping by!
I hope you enjoyed my journey into closet renovation land
as much as I did!
-Jacque